There are first times for everything, first trip to China, first international adventure race and first DNF. Only three weeks before the start date the Greenhorns discovered we were invited to China to race the Xtrail Altay Expedition, a 500km adventure race involving navigation, trekking, mountain biking, kayaking, rafting and a mystery activity. Xtrail had presented an unpredicted offer to cover the entry fee and a large part of the cost of flights for a number of youth teams to compete in the race. Our Greenhorns team from GODZone this year jumped at the opportunity and put in an application. We were one of nine lucky teams that received funding to go to the race. I couldn’t quite believe that I was suddenly going to get the opportunity to take on my first international race.

With only a couple of weeks to prepare it was hectic, booking flights, getting visas, doing assignments and getting gear ready to go. I had a lot of assignments to get done before leaving and had some due while I would be away that had to be completed early. Luckily I managed to get an extension on one big assignment. I was lucky with my family helping out with my Dad and partner building me a bike box while I studied. Eventually we headed off to China. It was an adventure in itself getting there, three flights, security checks and traveling with lots gear/bikes. We spent a couple of days in Kanas prepping before the race.

The day before the race the course details were released. We spent the rest of the day packing the gear boxes and getting everything set to go. The next morning before we got on the bus we got the maps. We had two hours to look at the maps and plan the course. Then we were off on the bus to the start line.

The nerves had started (as per normal) as the start of the race drew nearer. Then we were off with a run. We settled into a nice pace as we ran towards Lake Kanas. It felt like a long 3 km but before we knew it we were transitioning into the kayaks.

Into the kayaks and we were off on a paddle across Lake Kanas to the CP. It was a nice day; the weather was great as we paddled across the flat lake with fantastic scenery. With none of us having done much paddle training we were doing okay.

The raft was fun. After a quick transition we all crammed into a small budget raft and headed down the river. There were some fun rapids which caused us some trouble as the raft was not self-bailing and it started to fill up with water. Luckily we had some bailing devices and got onto it very quickly but not before Nathan got tipped out the side. We also nearly missed the take out. We saw it just in time, but got stuck in an eddy which felt like it took ages to get across. We then had to carry all our gear and the raft up the hill.

This was my favorite part of the race. Unluckily, when we got to the transition I discovered that a tube of

ointment had exploded all over my gear in the transition box. This made for a messy transition, but it did help relieve the pain of the sunburn I managed to get on the paddle legs of the race. I was surprised to get sunburnt so badly, finding that I forgot to apply sunscreen before the start of the race, oops! We set off along some boardwalk near the road and then cut across the road and headed up a hill. The sun was beating down and hot, which was a big change coming from New Zealand’s winter. We settled into a steady pace and the more we got into the mountains the more incredible the scenery became. We were surrounded by mountains, some with snow and got up to 2500m. I definitely felt I was worker harder than normal at our pace because of the altitude. It was exciting as we were walking into a storm of black clouds, we heard thunder and even saw lighting in the direction we were heading.

We ran into team Terra Adventure-Finalin a couple of times, they would get past us and then we would beat them to the control with slightly better navigation choices. Levi and Tom were doing really well on the navigation and it was paying off. After the CP energy levels were starting to drop off, we saw another team head into the CP just after us and they caught as just as we decided to look for a place to sleep. After a 2 hour nap energy levels were feeling good as we set off to finish the trek. We then got to do some orienteering around Hemu Village, a village with largely traditional buildings occupied by the Mongolian Tuwa tribe, which was cool experience. 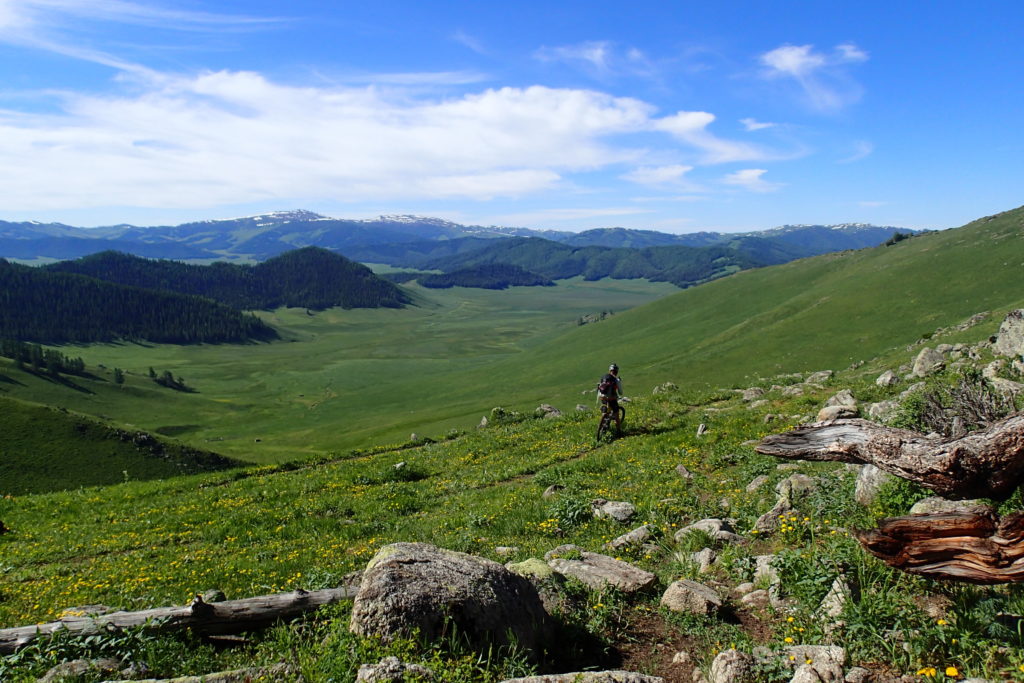 It was still early morning when we got into the transition. We had a smooth transition and then set of on the bikes. We saw some other teams in the transition such as Terra Adventure-Finalin again; many of them had not banked any sleep like we had. The morning had been chilly but the sun was starting to come out. We headed along the road and then turned onto a four-wheel drive track. This was nice until we hit a climb that turned into a long time pushing our bikes up the hill and being bitten by mosquitoes. Eventually we made it to the top and then enjoyed a short downhill section. Then there was more four-wheel drive track until the next CP, and then another climb. We then got an amazing downhill ride which was heaps of fun and made me forget the pain. We had some fun with animals on this section getting in our way. We had massive groups of goats, horses and cows blocking the track, which we somehow had to get around or wait for. It was then onto another hill, we saw the team who passed us the previous night who had stopped for noodles. At this point it was pretty hot, so whenever we were stopping for water supplies I was pouring water all over myself to cool my body down. The heat was taking a massive toll on everyone; I had never raced or trained much in those temperatures (another team had a team member pull out with heat stroke).

Going up the hill I was not feeling great and Tom had already taken some gear/weight off me. Nathan had been having some issues with his bike. We ended up stopping and seeing what was happening. We weren’t quite sure what to do so walked our bikes for a bit and then rode some more (while trying to figure out what to do) but it wasn’t far before we stopped again as his bike still wasn’t working. The drive chain was just way too worn out, was skipping and getting stuck/jamming and was not going to last the 140km we still had to go. The conditions we were riding in were taking a big toll on the bikes. We decided the best bet was to try and swap the chain from my bike onto Nathans as it was a much newer chain. I was still not feeling great. Tom gave me some of his protein shake and I took a 20min nap (in the hope that I would feel better again) while the boys set to changing the chains. Unfortunately this was not successful as the chains were different lengths due to the different cassettes sizes on the bikes. This left us with two options: to try and tow, or walk the bikes for the next 35-40km to the noodle house and see what could be done there or send a message on the yellow brick to find out other options. It was a tough decision to make, it was decided that even if we made it to the noodle house there wasn’t a way we could fix the bike and it was still 100km from there to the next transition. So we sent a message on the brick asking what our options were. I was heart broken and gutted, despite not feeling great I wanted to keep going. We waited hours for a response; we chased the shade going slightly down the hill to stay out of the hot sun. Eventually we sent another message which was pre programed asking for help. We got a response after then that help was on its way. We decided to head down the hill to the small village that was a military control point to wait and find some food. We hung out with some locals and got a yummy feed while we waited for our ride.

The boys sleeping while waiting for our pick up.

The adventure was not over yet as four of us were crammed into the back of a four-wheel drive with two bikes and our gear in the back with two left behind. We then experienced some crazy driving back up the hill and across the desert for a couple of hours to the noodle house (it was late at night when we arrived). There we were fed and I contemplated how three of us could continue racing; but the language barrier created issues trying to organise for three of us to keep going and finish race. We were therefore taken all the way to Altay where it was effectively race over.

It was a sucky way to end the race but it emphasised the importance of preparation and how to deal with adverse situations. In this case, there was not a lot we could do to fix the bike while we were in the race. It was a fantastic opportunity we were given to get to go over and race in China, it gave us the chance to build our experience at racing expedition races even if it didn’t turn out as planned. We can use it as an experience to learn from and to make us stronger as a team. In some ways it was better that this happened at a race where we had not done much specific training for it, as it was such late notice.

We spent the rest of our time hanging out and exploring Altay. We got to see team Seagate finish and win the race that was exciting although they were surprised to see us and another young NZ team Sneaky Weasel Gang welcoming them in. We got the opportunity to meet a lot of awesome people and adventure races. I got the chance to go out and visit a transition area with a team supporter which was nice as I was gutted to miss out on seeing the scenery of the other race legs. After this adventure I’m now back in New Zealand and have just finished my semester break. It’s now time to get back into study and finish my final semester of my degree while also doing some Spring Challenge training.