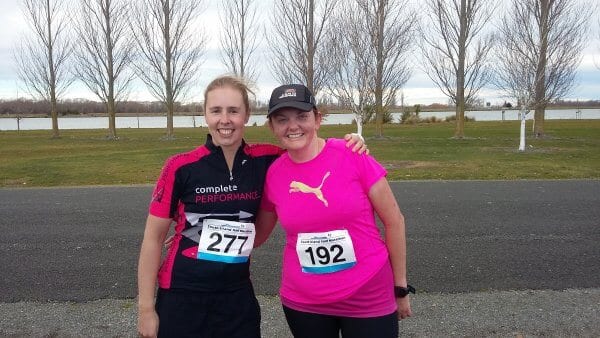 On Sunday 5th August I took on the Lake Hood half-marathon near Ashburton. This was something completely different from what I am use to; flat and fast. Earlier in year, when Richard and I were planning out races he suggested the Christchurch half as something different as we were planning to work on improving my running for Coast to Coast. I never would have thought about doing it otherwise, as I’m more into trail running. It didn’t work out doing the Christchurch half-marathon as I ended up racing in China; so here was another chance to give it a try.

I was up early on Sunday morning and enjoyed some breakfast before getting picked up by Vicki (also team CP) and joined by another mate heading out to Lake Hood. This was good as it kept me calm and relaxed before the race and I got to enjoy a social drive. I often have problems with nerves before racing, so it was a nice change to be feeling more relaxed than normal. I had gone over my race plan the night before and was feeling ok. I didn’t feel quite as fresh as I would have liked, but I knew it would be ok once I got started.

We picked up our race packs and before I knew it we were lining up to start. Then we were off! I took off quite quickly and was feeling pretty good. I realized that I probably needed to settle the pace down a bit or I would burn out. This was only the 3rd half-marathon I had run and the first one that was flat and not on trails. I slowly settled the pace down so I was not too comfortable, but comfortable enough to maintain pace. For me this race was about getting out there and giving it a good crack to try for a time of 1hr 45min. It was about just racing my own race and I think this helped prevent me from getting as nervous as normal; as it was really just a training session.

The course involved three laps around Lake Hood. The first lap went pretty well and I was happy and feeling pretty good. I was focusing on maintaining good posture as this then helps me to keep a shorter running stride and overall better running technique. What I didn’t like was when I discovered that one section had a really strong head wind which you had to push though…this was some type 3 fun (not fun at the time and not fun to talk about afterwards).

On to the second lap I was still feeling pretty good to start with. Mentally it was good to have ticked off one lap (7km). My hydration strategy was not going so well, I was attempting to drink going though the aid stations but 95% of it was ending up on me or on the ground once I gave up trying to drink it. I had never tried racing and drinking from cups before, and decided that my bladder is much easier. I was trying to keep the pace up in this lap but it was slowly dropping off as fatigue started to set in. I smashed back a gel to help keep the energy levels up and just keep focusing on myself. I fought through more wind and was happy to have finally made it to the last lap, only 7km to go.

Around the 15km mark things slowly started to fall apart. I was struggling to hold my posture now and my form was slowly falling apart, my pace was dropping. I kept trying to pick it up but it just wasn’t happening. I had thought that my pacing had been ok and I had been on track with my plan most of the way. I just focused on moving forward and counting down the kms. With only roughly 3km normally I would tell myself that that was nothing and to try and pick up the pace, but that didn’t quite happen today, at that point it felt like 3km was still a long way to go. With 2km or less to go I tried to just focus on using everything left in the tank and just get to the finish. It was a struggle to keep it up but next thing I knew there was the finish line, I crossed it happy to be done and then decided to acquaint myself with the ground. I didn’t quite mange to hit 1hr 45min, which I was a bit disappointed with, but was still happy to have given it a good crack and achieve a PB of 1hr 48min.

I enjoyed the race and it created some good learning. It was challenging running a flat course where you had to maintain quick pace throughout. I found that over the three laps my pace slowly dropped. I have improved my running posture a lot, but it still needs work to be able to maintain it over a long period of time. It was fun and I wouldn’t mind doing another some time. My next race is the Spring Challenge 9hr event which I am looking forward too. The training that I’m doing at the moment is also helping me to build up for the two day Coast to Coast and GodZone Pure next year.