The adventure of the two Tramps

Once upon a time there were two Tramps, tramp 1(Rachel) and tramp 2(Simon). They set off on a sunny Tuesday morning from the road end for an adventure in Tararua Ranges. They had two solid days planned, but the real test would to see if they could complete their goals of hut bagging Dorset Ridge Hut, Tarn Ridge Hut and Mid King Biv.

Their first stop was Mitre Flats Hut; they had a lovely walk along the track into the hut which took 2.5hrs (DOC estimate 4hrs); they were pleased with progress and prepared themselves for the hill ahead. The Tramps started on the big climb 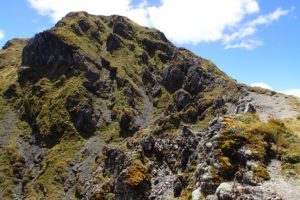 Peggy’s peak, it was part of the climb up to Mitre

ahead of them, it just kept going up and up. Finally they made it out of the bush line. They looked up and saw all the hill they still had to go! They just kept plodding on. Tramp 2 did not like the look of the walk along Peggy’s peak with a step drop on the side of the track. He keeping going, not looking down. The Tramps were ecstatic when they reached the top of Mitre at 1571m (the highest peak in the Tararua’s). They enjoyed the panoramic views on this glorious Tararua day. They had a nice lunch break before checking the maps and seeing what there was to come as the day was not over yet. From the peak they could see the two huts they were aiming to bag in the distance. 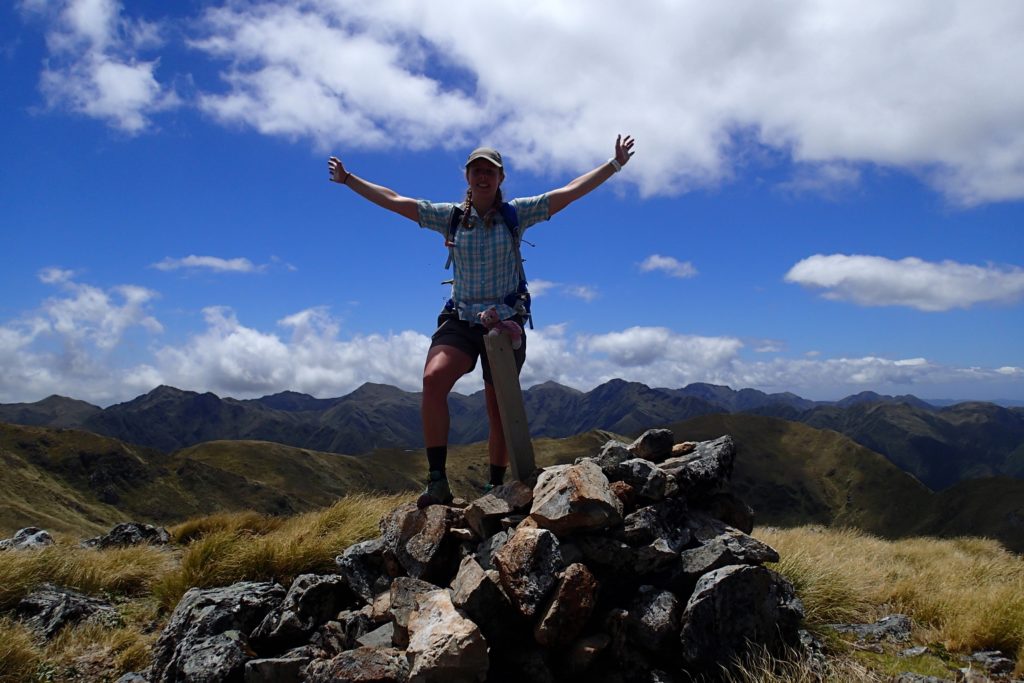 On the top of Mitre 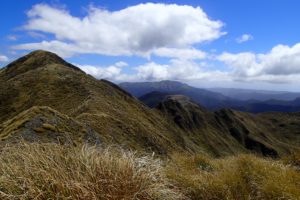 This is where we still had to go along the ridge

Off the Tramps set scrambling their way down the step side of Mitre. Tramp 2 was not enjoying the downward rock climbing. Across the ridge they continued and fear entered tramp 2 as he saw the skinny ridge ahead. It didn’t look that thin on the map! Tramp 2 slowly tramped on looking at his feet and not the drop below. Tramp 1 did what she could to help tramp 2. Progress was slow but they eventually made it to a junction on the ridge. The Tramps merrily headed down the ridge to Tarn Ridge Hut. They had made it! Hut number 47 in the Tararua’s for tramp 1. After signing the hut book and scanning it for interesting comments and friends, they set off on the final leg of the day. Back up the ridge they went to the junction; they turned off and headed on their way to Dorset Ridge Hut. After a bit more up and downs, the Tramps had finally made it to hut. Tired bodies lay in the sun outside the hut enjoying the best weather the Tararua’s could offer. 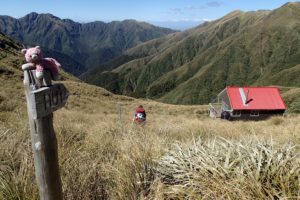 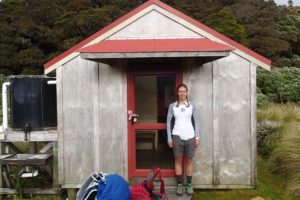 The next morning the Tramps got ready for another exciting day. They had enjoyed day one but they didn’t realise what day two was about to bring. They set off on an old track no longer maintained by Doc and had an interesting time following it down to Dorset Creek. It was steep and slippery, and tricky to follow at points. Once they had made to the creek they had to find a way up to the spur. With a bit of scrabbling and looking around they decided just to head straight up the step side of the spur. It didn’t take long to reach the top of the spur which the Tramps traveled up along to South King. On the ridge they were hit with typical strong Tararua wind which prevented them from being able to walk along the ridge. They sidled just below the ridge along to South King. From there the Tramps dropped down and had to navigate their way to Mid King Biv. This turned into a challenge with slippery snow grass, hidden Spaniard and unexpected holes. Worse was still to come. Tramp 1’s frustration started to increase, the Biv was so close yet so far when they hit the thick leatherwood which they had to bush bash through. Progress was slow and challenging, with the feeling that the leatherwood was winning. The Tramps finally made it out of the leatherwood and found their way to Mid King Biv! They were stoked to have made it out of the leatherwood and to have achieved their final goal. 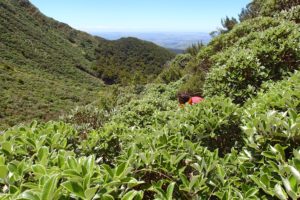 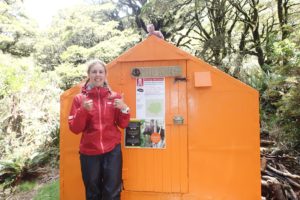 Finally made it to Mid King Biv

It was now mostly downhill from Mid King Biv back to Mitre Flats Hut. The Tramps where shocked to see their first orange track marker of the day which alas only lead them up out of the Biv and them disappeared again. They tried to follow the already formed tracks down the ridge and occasionally lost it. They made it to the river and then to Mitre Flats Hut. Now it was time for the home straight. The Tramps had a snack to keep their energy levels up for the final tramp out. The Tramps where very excited to finally be back on a marked track which they followed all the way out. The two tired Tramps had made it to the end of their exciting adventure. Tramp one was happy to have bagged three new Tararua huts which only left her with two remaining huts to bag. It was a good GodZone training mission with hopefully a few more exciting training missions to come before the race.