Peak # 13 was an awesome peak for many reasons;
Not least because of my awesome adventure team,
It was also my first peak on a Monday,
The perfect way to spend Labour Day it would seem!
By my side (or sometimes a wee bit ahead) was Rids a long term adventure pal, and my friend who initially got me into riding,
And Ken, father of my best friend and he is my friend too,
It was his unbeatable Bach in Hawea at which we were residing.
Watch out to those in Godzone, because Ken is sure in training;
He would pause to close the gate whilst we rode on,
And once he remounted, despite the gradient, on us he was gaining!
Then there was a new adventure pal Andy from Dunedin,
Ofcourse once I knew where he lived, his participation was a ‘shoo-in’.
Unfortunately our original target was off limits due to lambing,
These lambing months have definitely put a spanner in my planning!
The beauty of having a local along and one that is a great navigator too, (watch out godzoners)
Is that he could quickly find an alternate route, which also led to a remarkable view.
Up we climbed from Lake Hawea near the Timaru Creek Track,
With such a steep gradient and loose rocks
One is quickly reminded of which skills and fitness aspects they lack!
After some strong worded grumbles at the beginning I remembered to scooch forward and weight my front wheel,
It wasn’t so much my leg muscles, but my heart muscle in my chest that I could feel.
As evidenced in the pictures the view was a stunner,
And the loose rocks on the downhill meant the descent couldn’t have been funner (read terrifying). 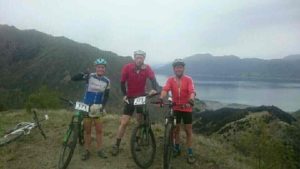