The adventure took place in Malaysia this time;

We begun our ascent in the thick of the jungle- thankfully it was not so hot in there,

And we were lucky to have the company and local knowledge of Uncle Beh  (pronounced Bear),

We hiked straight upwards to the crickets soundtrack,

Then suddenly a crowd of people and ”what on earth is that?!”

As if climbing up vertical stairs isn’t enough,

Part way up was a resistance machine playground- these guys must be tough!

Not just a playground but a coffee stop,

Fill your own cup from the giant coffee pot!

After many days in urban areas, this was a great nature fix!

The track lead to a road with a gradient I’d classify as extreme,

We then sipped tea and watched the sun go down,

And up came the lights of Penangs’ Georgetown. 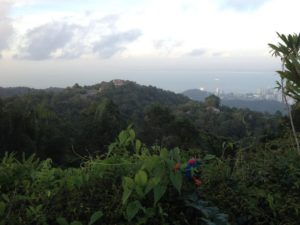