The road up Okuiti Valley from Little River isn’t actually on my topomap puzzle.

Yes, despite having 3 topo maps I decided to ride in the area of which I did not have a map for and thus I do not know what the peak is called.

It is definitely a real peak though- it had a trig AND a treasure box!

And I had to high jump over a barbed wire fence and navigate Gorse bushes to summit this one- it was tapping on the doors of extreme!

So extreme in fact that Puke decided to take a recovery day after his early morning peak last weekend and left it up to Hoiho the penguin to keep me company.

I loved the 360 views from this peak, so many green hills and bodies of water! I could see Port Levy saddle from yesterdays adventure, and Te Oka Bay and Magnet Bay of which I had just ridden alllllllllllll the way down to.

This part of the Banks peninsula has been largely unexplored by myself and now I am filled to the brim with excitement to venture to more of these apparently secret bays. 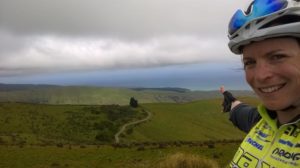 n’t exactly been fizzing on my bike but these liberating downhills, and the lure of the natural beauty around each corner had me making ‘yippeeeee’ ‘yahooooo’ sounds all the way down (I was a little quieter on the way up!).

This peak of the week adventure brought my fizz back- it was Treasure Peak indeed!