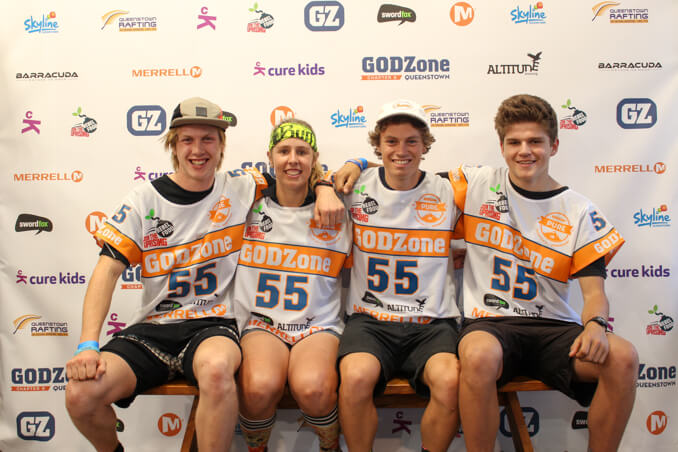 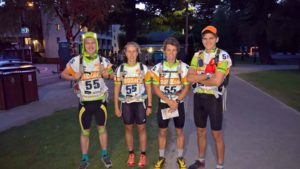 Just before the start

It was barely light as we stood on the start line. I was terrified, nervous and excited all at the same time. At 7am we were off with everyone running along Queenstown beach. We walked/ran our way to the top of the gondola navigating to controls along the way. It was then into a quick descent on mountain bikes. We shredded our way down the Queenstown single track and then headed to a climb. After the bike it was onto the paddle. We had one double kayak and one inflatable canoe so it wasn’t quick paddling. Next it was gorgeering where Tom enjoyed a quick dip to retrieve a control point (cp). 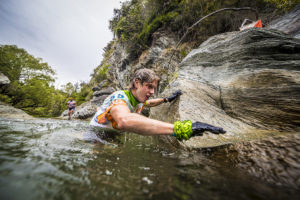 We started running the first flat section and then settled the pace down after the quick prologue (stage 1). Early on while climbing a hill we stopped to deal with some foot issues. The plan was to look after our feet well as we had a lot of trekking to go. We arrived at the cp around the same time as some other teams and raced with them for awhile on the way to the next cp. We dropped down to the stream earlier than the other teams and headed up the other side of the stream. It was tricky working out the best route choice and it started getting dark as we got nearer to the CP. We headed back down into the stream and bashed our way through with other teams. It got to a point where it seemed like we should have found the cp. We turned around, while other teams continued, and found the control, which was in a cool spot with a waterfall. We trekked on into the night, eventually stopping for some sleep. It was going to be a long race and we knew that being young sleep would be very beneficial. After about 2.5hrs – 3hrs we were off again, walking along a river, up a big climb and then scrambling our way down to the transition area.

I was looking forward to getting off my feet into the inflatable canoes. We transitioned and headed off for a nice grade 2 paddle down the Shotover River. I sat in the front paddling with Nathan steering and chilling in the back. We were near another team, which we managed to sneak past. We arrived at the old Shotover Bridge where we then had a cool abseil off the Bridge. Then we hit a snag, discovering that the trek to the next raft stage was taking teams 4-5hrs not the 1.5 to 2hrs stated in the book. Up until this point, we thought we had plenty of time to miss the dark zone (which is when we could not paddle on the River).

We packed up our paddle gear (which we had to carry with us) quickly and set off on a challenging leg, up and down hills. Tom did a good job navigating under a lot of pressure. We stepped up the pace with everything going pretty well until we made it to the last big climb. We did not pick the best route, as the hill climb had a rocky cliff section. Nathan managed to get up it. I eventually made it up but got well beyond my comfort zone and ended up leaving the dry bag pack behind so I could continue. I was uncomfortable as the consequences were not great if anyone fell from the cliff so we told Tom and Levi to take another route as they had ended up with extra bags to carry up. We got to the river and quickly changed into our wetsuits and got across the river to the rafts.

We then got told we had missed the cut off! We couldn’t quite believe it. Our watches all said roughly 6.22pm not 6.30pm – the cut off time. We were still told that we could not paddle and had to wait for 12hrs. The time was checked on other people’s watches, which turned out to be the same as ours. We then were given the go ahead for the paddle and were ecstatic. The guide (Michele) went and changed into his raft gear to take us down. So we and another team crammed into one raft with all our gear and headed down the Shotover River for an awesome, but cold grade 4/5 paddle. 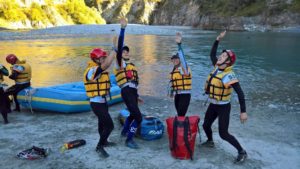 We clambered out of the raft as cold as icicles and in desperate need of food and warm clothes. We took our time in this transition to warm up and sort ourselves out and were very glad to have avoided the dark zone. Eventually, we set off in the dark on the 38km mountain bike ride. We rode most of the leg before stopping for a decent sleep and starting the mountain bike orienteering. Roughly four hours later (in the early morning, we were back on our bikes heading to the 7 Mile bike park. We had a blast riding loops of single track and were soon heading into the transition area. 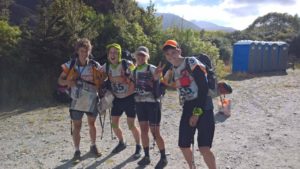 About to head off on the trek

We set off on the trek near a bunch of 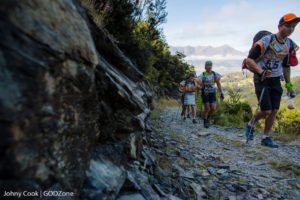 other teams. I enjoyed a breakfast of Absolute Wilderness Chia pudding while we walked. We picked up the controls and headed up the hill to Lake Isobel and the cp. The day started to heat up and got hot while we climbed up the hill near a couple of other teams. We continued up while others chose to sidle across more. Once up the hill we found that the planned route was not going to work very well. Instead of dropping all the way back down we dropped over the opposite side of the ridge and traversed along until we could go back up to the ridge and down to Lake Isobel to get to the cp. Then, we climbed back up before a long downhill slog to transition.

It was dark by the time we reached the transition area. Once in our kayaks we couldn’t really see anything so followed the shoreline to make sure we did not miss the control. I was struggling to stay awake at this point. We made it to the transition area and got ready to set off on the bikes.

We decided to smash out part of the mountain bike leg before stopping for some much needed shut eye. Once we got going so did the loud singing, which must have sounded terrible but was fun and kept us awake. We found a hay shed where we stopped for some sleep. It was really comfortable and all too soon we had to get up in the cold morning air and keep going.

Two teams passed us just as we were getting up. We passed one early on and then caught another further on. We set a good pace on the ride to start and just keep going. On the climb we were catching up with teams and passing them. We just kept moving on the ride and it just kept going up. We ended up walking our bikes up the last parts of the hill. It was awesome to reach the saddle. We flew down the other side, loving the downhill, while being careful not to crash. We passed one team who was unfortunately having some bike issues. Coming into transition we were surprised and stoked to find we had moved into the top 15 teams.

After an awesome mountain bike ride it was time to set out on the last big trek. We took our time in the transition to air out our feet, apply Gurney Goo (this stuff really saved my feet) and get ready for what was to come. For the start of the trek there was a compulsory route out which we followed. We had to try and make the most of the last daylight and decided to get onto the ridge and follow it. During this stage things got a bit crazy, Levi started seeing faces, the fatigue and lack of sleep hit me – I was walking like a drunk and was very confused. On the way down the track to the cp Tom started getting exciting sleep monsters. Nathan was the only sane person left. We managed to sneak into a hut for a 1hr 30ish nap before finishing the rest of the trek. Up the hill we went and then across to left and down the ridge – it was slow moving as we were bashing through scrub. We ended up dropping down into the stream, which turned out to be a bad call. It was all going fine until we got to a gorge, which took a while to navigate safely. Once we were out we started running as we had lost a bit of time in the stream. We raced into the transition, eager to get on the water and get to the finish.

We were off – all keen to smash this leg out. We settled into a steady pace and picked up the first 2 controls. There was a team not far behind us, which we wanted to stay in front of. There was another team on the side of the lake and we were confused as to what they were up to – it turned out to be team Motueka who had left their tracker behind. They got back on the water not long after we passed them so the race was on. This was also when the weather picked up and the water started white capping and we battled our way through the waves. It was exciting. The front of our kayak was sinking, which was when we discovered someone had forgotten to put the neprene cover on the hatch. Our kayak was filling up with water! While sitting in the waves we had to raft up to the other kayak so Tom could bail the water out of the front of our kayak. Then we were off again paddling through the waves to the finish. We made it to Frankton in 4 days 12hrs 40mins and were stoked to finish in 12th place as the youngest team in the race. 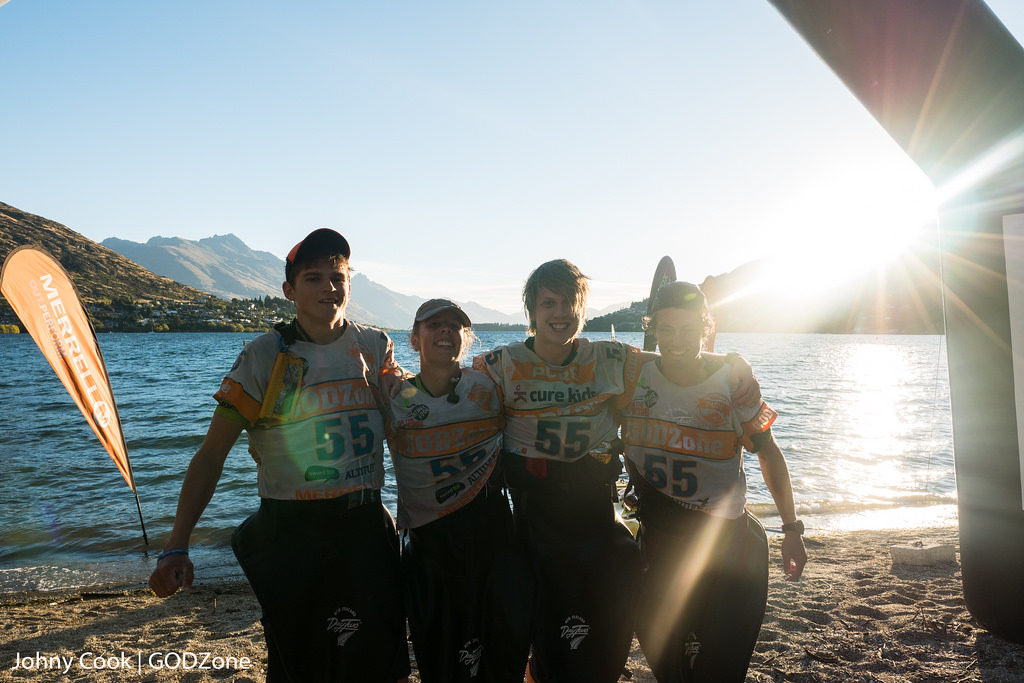 It was an awesome adventure. Thanks to all our amazing friends, family and supporters who were behind us. Also an extra thank you to our sponsors whose support and products helped get us through the race:

We couldn’t have done it without everyone’s support. I am now enjoying my recovery and have been catching up on the missed study.