Coast-to-Coast Longest day (C2C). The goal was simple – to finish, to travel 243km from the West Coast to the East Coast. Really, I was travelling home by foot, bicycle and kayak. Having done well in the two day it was time to tackle ‘The Longest Day’, which was something I had always had in mind to do. 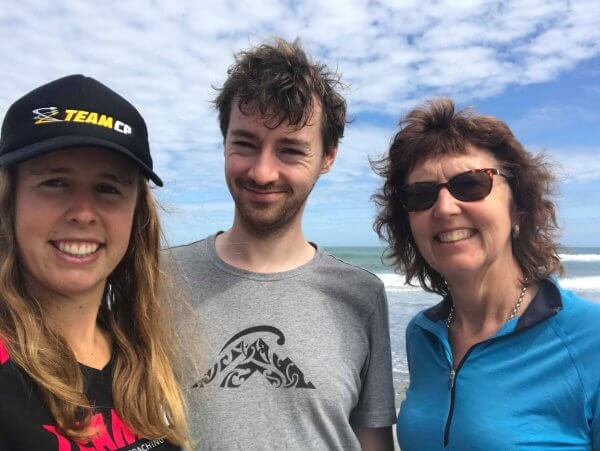 I had a challenging build up balancing full time work, wedding planning, training and just life. Having raced Red Bull Defiance a couple of weeks before gave me some confidence that I would be able to complete the day. However this meant it was important to recover well between the two events. I have done bigger days, the challenge for me is that C2C is a fast race; you have to work on keeping going at a good pace. It was also different that I would be doing this race as an individual rather than in a team. 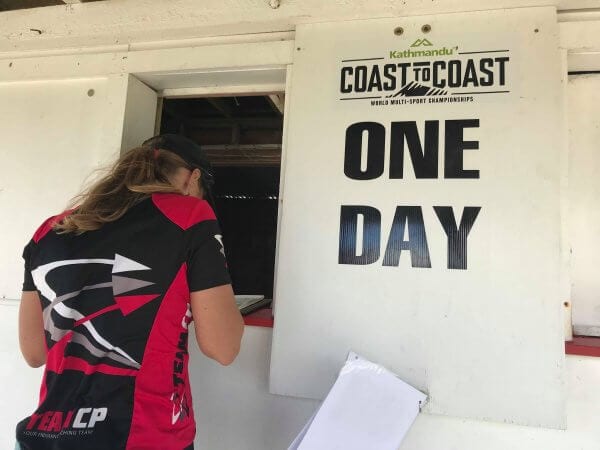 Attending race briefing the atmosphere felt somehow different to the two-day race. I started feeling like I had joined the big kids club. We splashed out this year and stayed in some accommodation, which was amazing and made life easy when the alarm went off at 4am, as there were no tents to deal with. I mostly slept well the night before, but woke up in the middle of the night with a sick stomach, was it nerves? I’m not really sure.

I wasn’t sure how I was feeling heading to the start but I knew I was looking forward to getting to my kayak, there was cycle, and a mountain pass to run over first. It was still dark as we stood on the beach ready to go. We headed off on the first 2.2km run, I was pushing hard to get into a good bunch, however this year I wasn’t super quick in my run. I made it to the bike for a reasonable smooth transition. It was raining through the start of the ride but it didn’t really bother me, I’ll ride my bike in most conditions. I managed to get into a bunch, there were a few guys in the first section rotating through at the front but otherwise it didn’t seem to be quite working as many people didn’t want to share the work at the front. The biggest thing I noticed was the ride was less hectic and fewer surges compared to the two day. Everyone wanted to get through the rain without an accident. On the second half I ended up at the front and helping rotating through; but again it seemed there were a lot of people behind us who never did any work at the front.

Off the ride it was onto the run. I had chosen to use clips on the first ride, which meant I had slightly slower transition, as I had to change my shoes. My support team was great and helped shove banana into my mouth. Unfortunately this food did not last long; as about 500m out of the transition I threw up my breakfast. I slowly eased back into running. I wasn’t feeling too bad on the first section, however for most of the run I battled with stomach issues. I still worked on getting nutrition in but in the form of gels. It would take me a long time to take one gel but at least I was managing something. I focused on breaking the run down into smaller segments. When I made it to Doreen Creek, I was 5mins behind the timing I was hoping for but was excited to make it onto the boulder section. This section flew by quickly to Goat Pass Hut, which was nice. A guy worked hard to catch up to me and we enjoyed some good conversation, that was a nice distraction from my stomach. 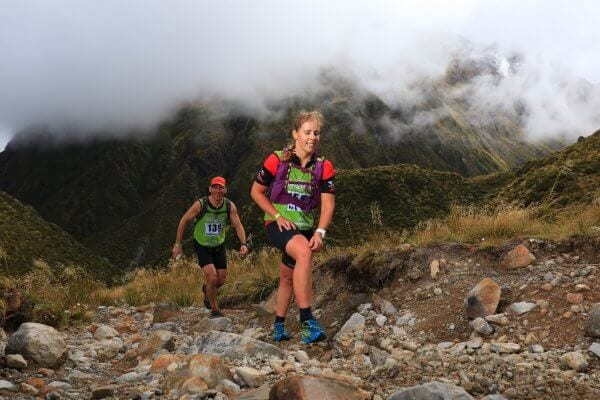 I was excited to get to the downhill and tried to pick up the pace. I just kept focusing on picking off points, Mingha Bivvy, Dudley’s Knob, the Bealey River and then was running the last section along the rocks; keen to make it to the transition. 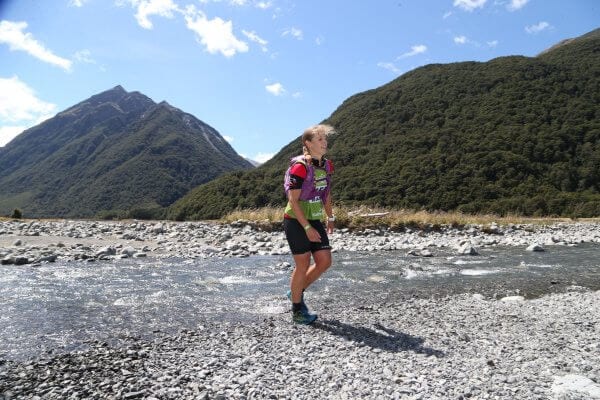 There were lots of yells of support as I ran into the transition. My run to bike transition was smooth but not super quick. It felt good to be on the bike. My aim here was to try to get some solid food in. I had a selection of food to choose from in my bike bento box. I thoroughly enjoyed chomping down on some sausage rolls. I managed to get a good amount of food in without upsetting my stomach again. After not long I was heading up the last hill climb to the run/kayak transition. I saw James, racked my bike, changed into my running shoes and slowly jogged down the hill. James helped here and fed me some baby food that went down a treat. A good tip Richard gave me here was its okay to slow down or walk parts of this section to keep my food down. That exactly what happened, I had to walk small sections to make sure I didn’t throw up again. 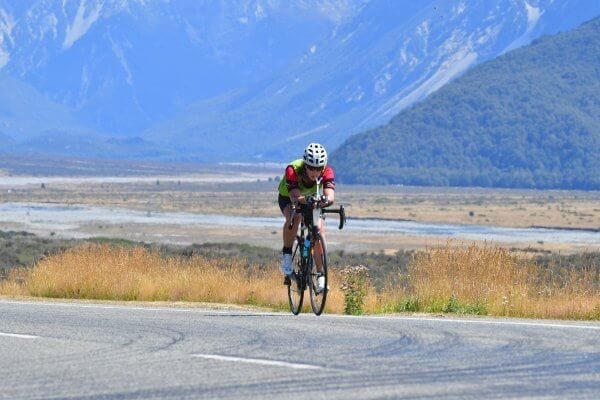 I was really happy to see my kayak. Again it was a nice smooth transition onto the kayak, my support crew were really nailing it. As asked before the race, James gave me specific directions on the line I needed to take to leave the transition without getting beached. It worked well and I felt like sticking left was the way to go, I managed to successfully get down to Gooseberry without having to get out of my kayak. I was a bit slow getting going on the paddle but slowly managed to pick the pace up.  It was exciting catching up and passing lots of guys who had passed me on the run. 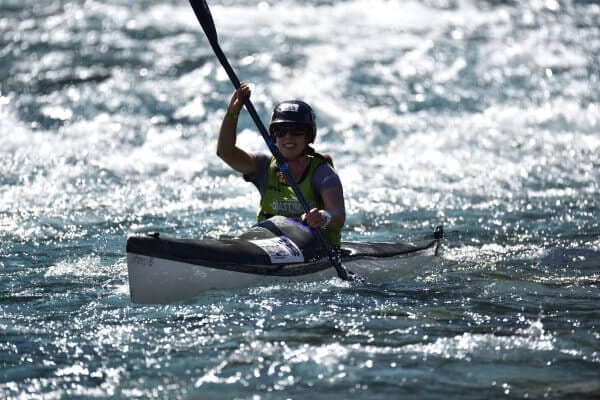 I applied the same technique of just focusing on ticking off locations throughout the paddle.  It was exciting to reach the start of the gorge; I had never paddled the Waimakariri River when it had been this low before. I got my heart rate up early in the gorge when we were directed to paddle right of a rock. I did not partially want to take this line but followed the instructions. I was not happy when I went around the rock and then found myself paddling over another rock and through a wave chain. They kept saying paddle left to get out of it but this is easier said than done….. after getting through that, I was really on my game for what was to come in the gorge. Along the way I enjoyed sipping on smoothie and ‘Tailwind’, which kept my energy levels up. I made through the gorge in one piece without any major mishaps and enjoyed most of the paddle. I planned to pick up the pace at Woodstock, which I definitely tried to do, but I did not really manage to increase the pace much. I was glad when I finally went around the last corner and was at Gorge Bridge. 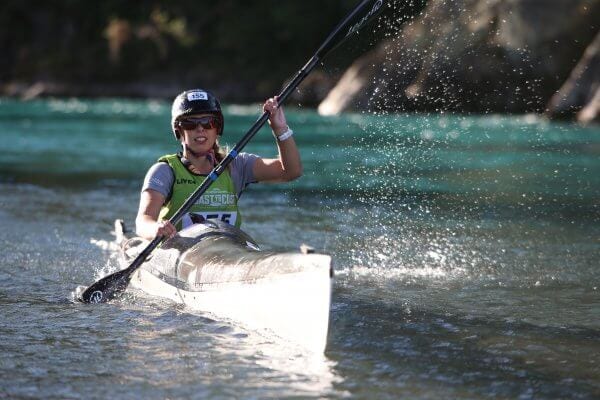 It was now just the home straight to go; just a 70km flat cycle…I hobbled out of my kayak and started striping my gear off while walking up the hill. A quick bathroom stop and then I was headed out on the bike. My support crew had tried to feed me and I accidently yelled at them “no more food, I’m full!” as I was super full from my yummy berry smoothie. It was a little bit funny.

Once on my bike I just worked on getting the legs spinning and up the small hill. It didn’t seem too bad and then at roughly 65km to go everything seemed to hurt. Earlier in the day my feet had started to hurt but luckily this wasn’t a problem in the kayak. However it was like a burning sensation every time I pushed my feet down on the peddles. I’ve had it before when racing GODZone but had never expected it during C2C. Then my back also started hurting, I found myself shifting around in different positions on the bike that felt like I was riding a brick on the rough road. All I could do was keep pushing forward. I appreciated the tailwind for the first part of the ride. I had to dig deep to keep pushing forward but often that’s what racing is all about – giving it everything and seeing how much you can push yourself. I started singing songs as a distraction from the discomfort. It was entertaining, as I would run out of breath when I tried signing aloud.

I was glad when I finally made it to the highway bridge and was counting down how far to go. Closer to the finish there were people yelling support along the way, someone yelled 8km to go. I had no idea if they were telling the truth or not but I decided this was the point to dig really deep and empty the tank. I tried to pick the pace up and pushed hard to the finish. Finally it was there, I left my bike and ran for the finish. It was the most amazing feeling running down the finishing chute, there was so much cheering and support. Then I was there, greeted by Steve Gurney with a hug and an “aww Rach” I had made it from the West Coast to the East Coast. There is nothing else quite like the feeling of crossing the Coast-to-Coast Longest Day finish line. 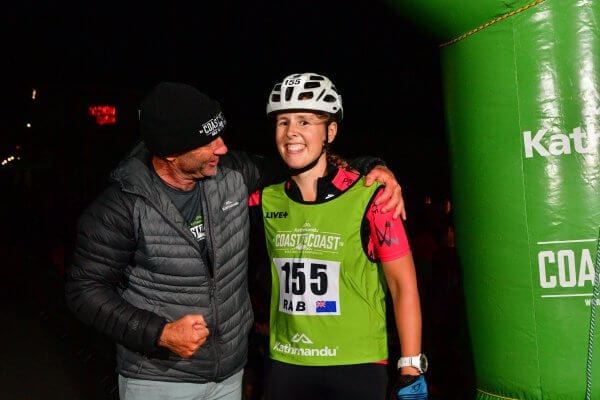 I don’t really know how to sum the whole race up. It was definitely an adventure filled with highs and lows. My support crew were amazing, I felt like I almost had a professional support crew. Mum and my now husband James did a fantastic job; they have supported me for so many years through my training and racing. We have learnt a lot together along the way. They have even started thinking about what they want to do better and how the transition were smooth but that we want them faster. TeamCP has also supported me over the last four years that I have been in Christchurch. The group sessions make training fun and social as well as a good workout. Richard puts together my training program that really helps me to balance training with work and train effectively.

Now the big question I keep being asked – what’s next? I’m really unsure on the answers to this, I have a few ideas brewing but am not sure what I will be able to make possible. However that is okay, I’ll take some time off training and just enjoy some fun adventures. I even went whitewater kayaking this last weekend, which was fun.