Everything was ready to go, I was ready to take on the Coast to Coast. It would be about giving it everything and trying to do it as fast as possible. I often feel, at the start of a race, that I should have done more training but for once I felt like I had done everything I could. 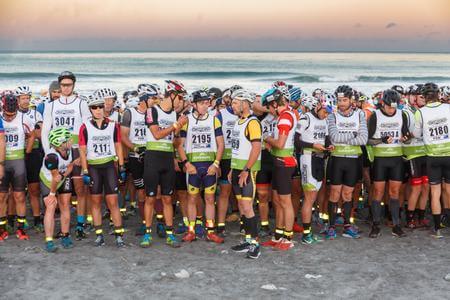 Somehow, I found myself in the front row getting ready to go. I felt proud to be standing next to a close friend of mine; she was doing the team event. Many years ago, I never would have imaged us standing on this start line together.

Then we were off. It was carnage with people pushing to get off the beach and over the rocks. I was pushing the run and then settled into a good pace. I was huffing and puffing when I entered the transition and found my bike. Running shoes off, bikes shoes on and I pushed my bike out of the transition, jumped on and was off. I had a smooth transition and did my shoes up once I was on my bike.

I got a bit carried away starting on the bike as I was trying to make it to a good bunch. I drafted off a tandem team for a while in a small bunch that grew bigger and bigger over the ride. I kept hydrating and smashed down three Gels over the ride to make sure I kept my energy levels up for the run. A massive bunch caught up to ours, after which it was a bit crazy. You had to be super careful of other people. I am best at hill rides rather than flats so this ride suited me, but it got frustrating on some of the climbs as the bunch would slow down a lot and then start accelerating closer to the top.

We crossed the railway line and I knew we were close to the transition. I went through what I needed to do in the transition in my head, remindin

g myself that ‘smooth is fast and fast is smooth’ and that is how the transition went. I racked my bike, leaving my road shoes with it. I spotted my support crew and then my shoes and bag were on and I was off. I had practiced for the first two transitions, which definitely payed off. 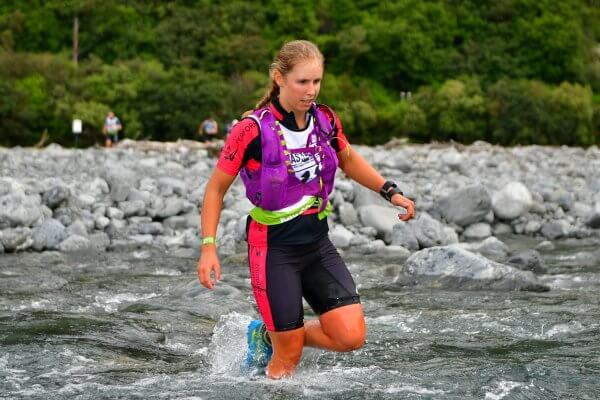 I slowly ran out of the transition smashing down part of banana. I felt really slow, so I focused on my race plan to start slow and ease into the run. I did not feel great so concentrated on getting to the first bridge, then the first river crossing and to keep moving forward. It was discouraging having lots of guys passing me, but I just stuck to my plan. One female in my category passed me early on and I just let her go. Not knowing how I was placing at that point I was surprised more females were not passing me.

I started feeling better further into the run. Along the way, I talked to some people and decided to ask everyone where they were from. By the end of the day, I had meet people from Wellington, Queenstown, Fairlie and Napier among others. Before I knew it, I was at Dorreen Creek – nearing the beginning of my favorite sections. I filled up my soft flask and managed to lose the lid. This was not good as I was planning to carry water in it on the bottom run section.

I kept going and continued drinking from the river. I enjoyed the boulder section and caught up to some people here and got stuck behind others. Eventually, I caught up to the chick that passed me. I sat behind her for a while before making a move past and heading up the hill climb to the hut. 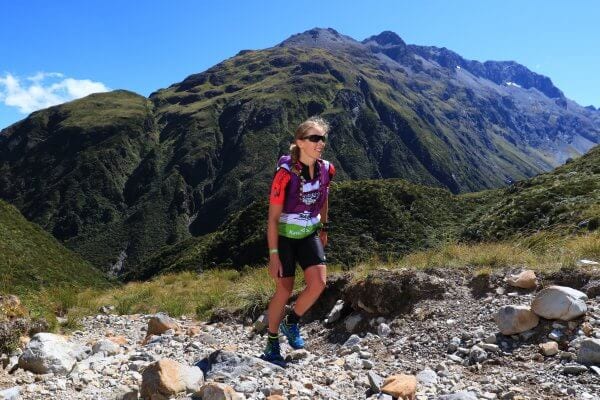 At the top of the hill, I was looking forward to the downhill. I was feeling good at this point and flew down the hill, having lots of fun. Luckily a competitor was kind enough to lend me a spare soft flask which saved me as otherwise I would have had a limited water supply. I kept ticking points off and was glad to get up and over Dudley Knob. I enjoyed the technical sections and found that this was where I was catching people.

Before knowing it, I was onto the riverbed and getting closer to the end. My training had paid off as I was still running strong on the final sections, but struggled on the very last section and was pleased to make it to the finish, totally shot. Day one done – I was pleased with how most of the run went, but did not make the 4hrs 30 minute time I would have liked. I finished in 3rd place, which was exciting, but knew I had my work cut out to hold this place.

It was hard to get up for the start of day two. I was feeling a bit tired and sore; it reminded me of how it feels every time you wake up from sleeping during GODZone. I made it to the start line, looking forward to the paddle. 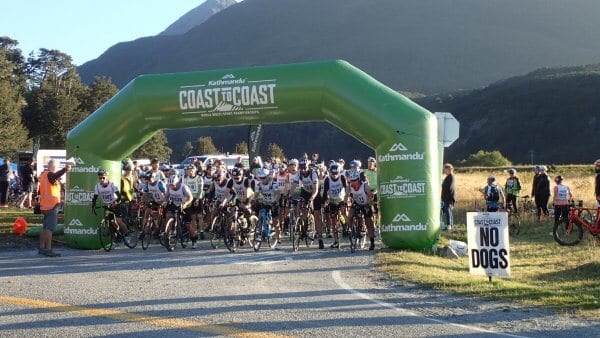 We started with a nice short cycle to warm up. Competitors were broken into waves and set off at 1min intervals. I started in the same group as the 4th placed chick who finished close to me on day one. I had a good cycle, enjoying some quick climbs, although it was hard work as I pushed it on the ride. Then I was off my bike and running down the hill to Mt White bridge pushing my bike. It is surprisingly challenging running down the hill pushing a road bike and I really wanted to ride it. 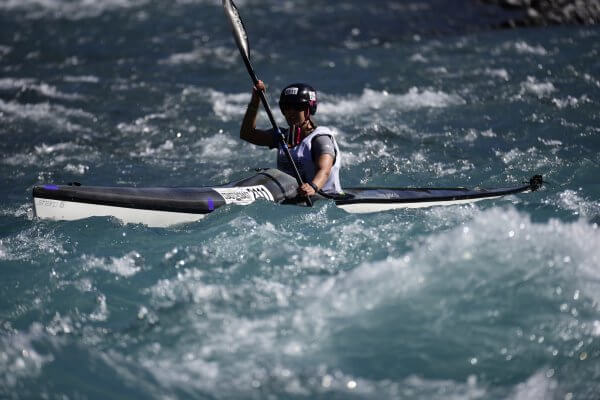 My kayak transition was not the quickest, and running along the river in my mountain bike shoes wished I had changed into my booties just before the rocks. I finally made it to my kayak and spotted that the flag was still on the end. I was getting ready to go and spotted the 5th place chick! I focused on myself, she got off before me but I made sure to get my drinking system set up correctly. Then I was off.

I was not sure about my placing at this point and focused on my paddling and my race plan – to get to, and through the rock gardens. It was not long until I saw the chick that passed me. I slowly caught up to her and then caught another chick who had snuck past me in the transition.

I made it through the rock gardens safely and to the start of the gorge. I enjoyed the gorge, making sure I picked good lines. I got my heart rate up going through Hamilton Rapid and was happy with my line choice, sneaking down the left line and avoiding the rough stuff. Allthe way, I sipped on tailwind and a yummy berry smoothie to keep me fueled. I knew there was a female on my tail and just had to keep moving forward. Sometimes I took safer, rather than fast lines, but everything was going pretty smoothly. 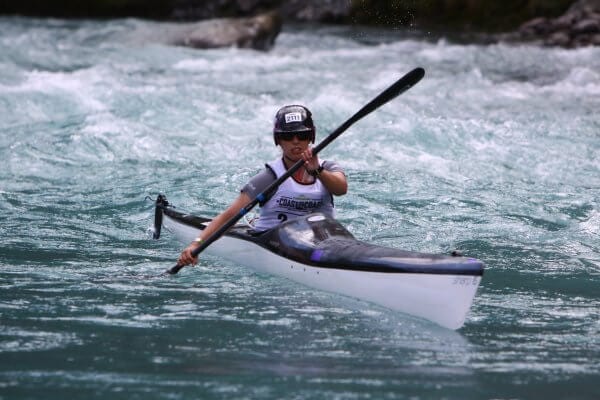 Eventually I was hanging out to get to Woodstock, once there I knew there was not far to go (15km). I tried to picking up the pace, but was not super successful although I was making ground on a lot of guys during this section. What I did not know was that somewhere on the paddle I passed the female who came first on day one. I made it to the Gorge Bridge and was glad to get off the water. 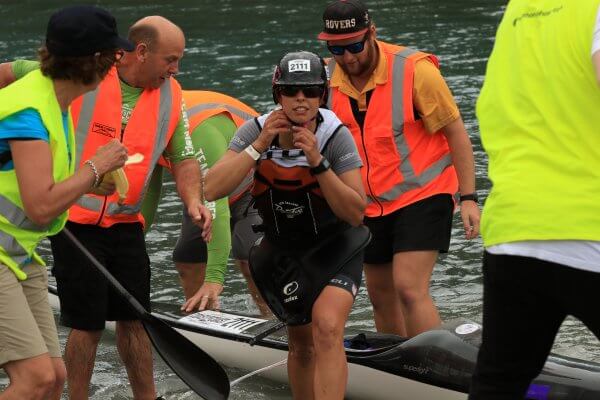 I had a smooth transition onto the bike, and was off ready to tackle the final leg. I knew I had my work cut out for me, as I was still being chased. I hoped to get a bunch, which I did for the first half of the cycle. It was going well, until another bunch caught up to ours. Then our system started to fall apart, with holes starting to form. I was dropping from the front to the back when things fell apart for me. The back was a mess, with lots of holes and I ended up getting dropped. Everyone was pushing hard not to lose the group, but I just could not get back on the end of the bunch!!

It was not good, another guy also got dropped and we worked together for the final sections of South Eyre Road and into Christchurch. It was slow going with just two of us into the headwind. We were maybe 10-15km to the finish when a bunch caught us and there were two individual females – eck. I jumped on knowing that I had to stay on this bunch to try to hold onto a podium finish. I knew there was not long to go. We picked up a few more people who had dropped from the big bunch and then entered the final 1km and this was it. I stumbled off my bike, dropping it and ran up the finishing chute at the same time as another female. I had made it, 243 km over two days from the west to east coast. It was finally over, the training had definitely paid off and it felt nearly like the end of a journey. I scraped into 3rd place female individual; taking it by just 2 minutes. It shows that small things can matter (I’m glad I didn’t get a puncture on the final ride!) 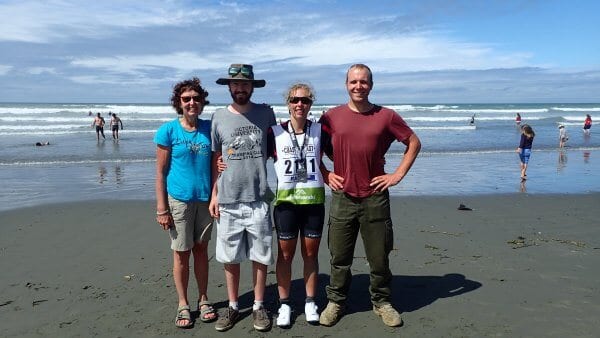 With my awesome support crew. Thanks guys!!!

Well it’s not really over yet, I am taking it easy at the moment, recovering and preparing to race GODZone at the end of the month. It has been challenging training for both and soon time will tell if I have been successful in that. Then the journey will be over, I will take a holiday from training and racing and start a new challenge and stage of my life starting a new full time job (after finishing study). For now, I just need to make it to the start line.